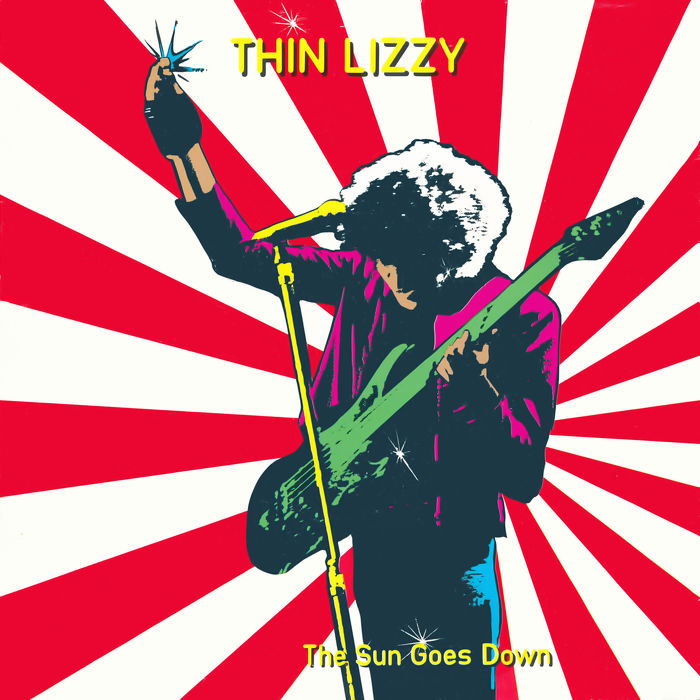 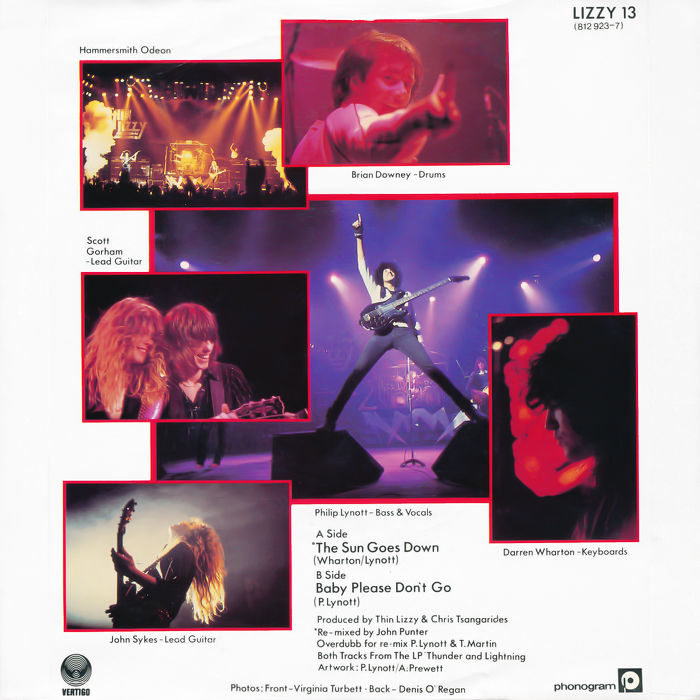 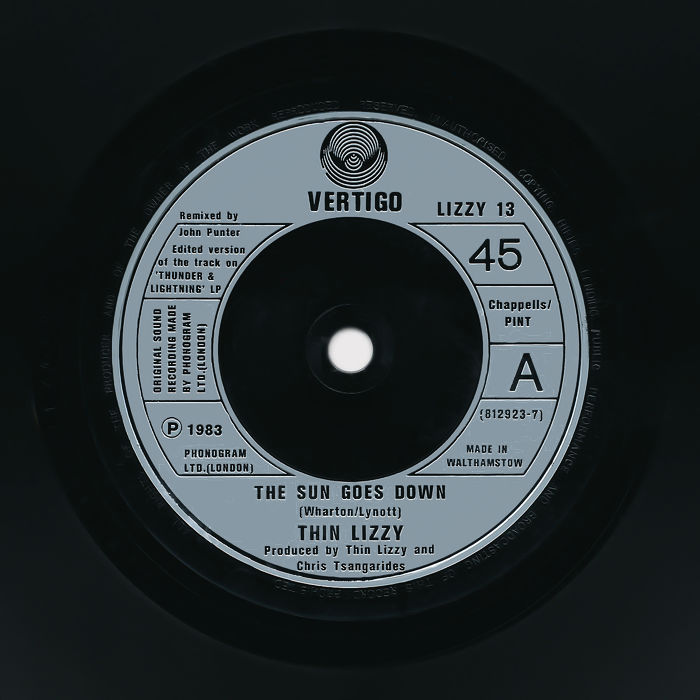 The Sun Goes Down

A linnet is a small finch, once popular as a cage bird because of its melodious song. It is not to be confused with the surname of Phil Lynott (pronounced: lie-not), the late master of melodious rock and founder of Thin Lizzy, arguably the greatest Irish rock group (although U2 fans might disagree). Ironically, the group's final single was a marked departure from their trademark heavy rock style, but this only adds to its poignancy. For the ethereal and haunting sound of The Sun Goes Down was not only the swansong for Thin Lizzy but it also foreshadowed the tragic demise of Lynott.

The song was first played live a the Regal Theatre, Hitchin, when the group featured on BBC's Sight And Sound, a 40-minute programme broadcast simultaneously on BBC2 and Radio 1 on Saturday 5 February 1983. Viewers were urged to turn off the TV sound and listen instead on their hi-fi system. After playing their latest single, Cold Sweat, Lynott introduced The Sun Goes Down as "the only slow number" on the Thunder and Lightning album and described it as "deep and meaningful".

Indeed, the lyrics are as reflective and brooding as the music. Painting in broad brush strokes of sentiment rather than narrative, they are intentionally left open to interpretation. This is largely due to the use of personal pronouns, suggesting the song is about a relationship. "She tries her best to leave him, but she is still captured by his spell She knows now she must deceive him, he knows it all too well". This is not a normal relationship but one of compulsion and dependence, something Lynott knew all too well.

Although accounts differ to the timing and the extent of the problem, there is no doubt that Lynott had developed a serious heroin dependency. It has been alleged that his bout of hepatitis in 1976, which ended a promising US tour and undermined their chances of making it big stateside, was caused by a dirty needle. Guitarist Scott Gorham recalled walking into Lynott's room in the late 1970s. "He pulls out this package. He opens it up and I see the brown powder… that was the start of the whole thing. It was the worst mistake that band ever made."

The track entwines the themes of deception, compulsion and tragic inevitability, reflected in the lamenting keyboard hook. Something you once believed was your salvation is now your damnation and, despite your hopes of change, the inevitable happens. Such thoughts were strikingly captured by the opening lines: "There is a demon among us whose soul belongs in hell Sent here to redeem us, she knows it all too well He comes and goes, he comes and goes She knows it all too well But when all is said and done The sun goes down". The BBC performance omitted this verse, however, and added an extra guitar solo.

With a complete lack of support from their record company there was no video or promotion for The Sun Goes Down. This greatly affected its success, although perhaps it was fitting that it languished in the twilight positions of the chart; its performance mirrored the lyric reflecting on the end of something that was once beautiful. It also meant that we are left we little footage of Thin Lizzy performing the song, especially as it was not part of the set at the group's last-ever concert at the Monsters of Rock Festival on 4 September 1983 in Nuremberg, Germany.

The group split. Lynott enjoyed brief chart success collaborating with Gary Moore on Out In The Fields in 1985. This was the year of Live Aid, and Lynott wanted Thin Lizzy to be part of the historic event. They were not, but U2 were; the disappointment must have been crushing. "It was a tragic decision," recalled Darren Wharton, a former member of Thin Lizzy. "Despite the problems, Phil could be fine for the show. I don't think he ever forgave Bob [Geldof] and Midge [Ure] for that." Perhaps the organisers were not prepared to take the risk on someone who was tragically lost in the abyss of drug abuse.

And listening to this mesmerising track, it seems that he realised that he would never escape his demons because "But when all is said and done The sun goes down".

We hereby instate The Sun Goes Down by Thin Lizzy on The Wall as No.9 Best Single of 1983

A sublime track, one that offers something new every time you listen. It shows what an accomplished songwriter Phil Lynott was.Ant B

*Written by: Darren Wharton, Phil Lynott. Taken from the album "Thunder And Lightning" 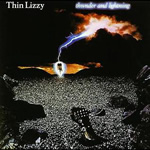